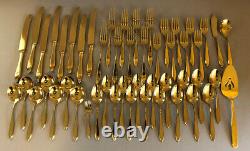 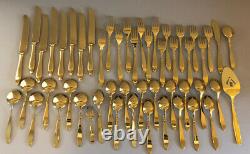 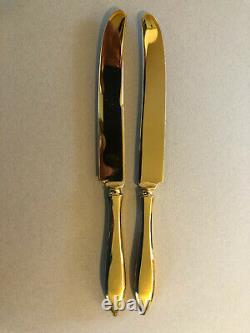 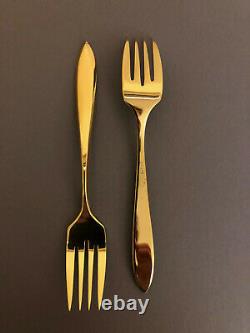 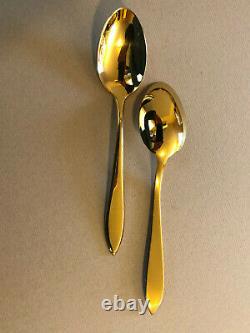 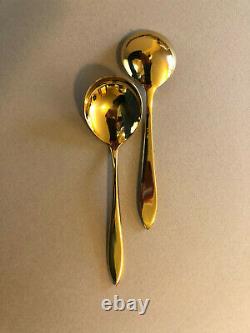 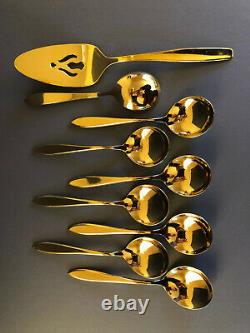 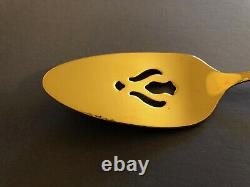 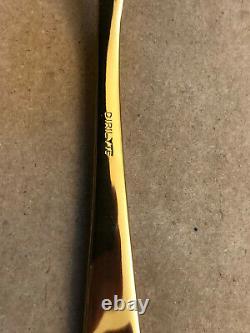 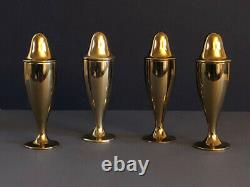 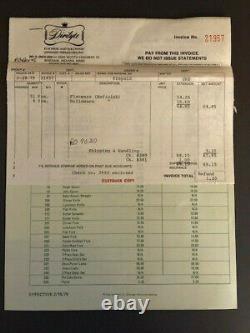 This intriguing flatware was really fun to grow up with! There are 52 pieces: 8 knives, salad forks, dinner forks, soup spoons;16 teaspoons.

1 cake server, 1 sugar spoon, 1 butter knife, 1 baby fork. My mother had the set refinished in 1979 with tarnish-resistant bp coating see the photo of the invoice. She later bought a set of silver flatware, and rarely used the Dirilyte. I snapped close-ups of the cake spatula and the top edge of the soup spoons and have decided to include them without charge, as the tarnish-resistant service is no longer available.

The cleaning/storage of the flatware is specific and important; BE SURE to follow the instructions at Dirilyte. Ive excerpted a few sentences, below. The polish that Dirilye sells should NOT be used on flatware that is bp-coated. Be sure to browse online comments and tips for preserving the finish. All pieces are wrapped in cotton paper supplied by the company, which has kept them shiny.

I think the story is interesting, too, so I included it. Dirilyte was originally created as Dirigold. The bronze alloy from which the product is produced was originally created and developed in Sweden in 1914 by Carol Molin, a Swedish metallurgist. Molin brought the line to the World's Fair in New York City, where he met Oscar Von Malmborg. At the Gohlenburg Exposition in 1923, the two men were approached by Swedish-Americans who proposed that Dirigold be brought to the US.

In 1924, Von Malmborg formed a company in Minneapolis, Minnesota while Molin continued to operate the manufacturing plant in Sweden. The next year, Molin brought six men and their families from Sweden and, with Von Malmborg opened Dirilytes manufacturing plant in Kokomo, Indiana where it thrived until the effects of the Great Depression in 1929 forced it into receivership. A new company, American Art Alloys, was formed and continued to market the flatware and holloware under the name of Dirigold. That year, the Federal Trade Commission brought suit against the.

Company, charging that the name was misleading because the alloy did not contain any gold. The company changed the product and company name to Dirilyte. The name then became and remains the Dirilyte Company, Division of Hand Industries, Inc. Dirilyte ceased production in 1986. Care for your Dirilyte by washing immediately after each use to help reduce exposure to such foods as salad dressing, eggs, mustard, butter, etc.

Wash by hand in warm water using mild detergent, rinse well, and dry thoroughly. Avoid leaving in any solution (even water) for prolonged periods. It is recommended that Dirilyte be stored in untreated flannel wraps.

The seller is "termccla" and is located in Portland, Oregon. This item can be shipped to United States.